Since electricity and water observe many of the same natural laws as they occur in nature; a good way to imagine the electricity in a battery is to imagine a household bathtub.  Filling a battery (charging) or emptying a battery (discharging) follows the same basic rules of pressure, speed, and time that are similar to filling and emptying a bathtub.  If you were to attempt to fill a bathtub with a squirt gun it would take a lot longer than if you were to simply turn the bathtubs faucet on full blast.  Similarly if you empty a bathtub full of water by scooping out a glass of water one single cup at a time it would take much longer than if you were to simply open the drain plug.

Like the bathtub image; batteries can also be emptied: a) in small or large quantities [pressure]; b) more quickly or slowly [speed]; and c) … in minutes or over hours or days [time].  When considering batteries, it is always important to know how much electricity you need (pressure and speed) over how much time.  Batteries are measured in three ways … Volts, Amps, and Watts.

AMPS:  are the speed that electricity travels.

WATTS:  are a unit of measure that are a combination of Volts and Amps (Volts x Amps = Watts).  So watts measure how much electricity is delivered at any given moment (force and speed).

And AMP Hours (AH) are the unit of measure for a battery’s electrical storage capacity (how many constant Amps over how many hours).  A batteries total storage capacity is similar to a large water basin … the bigger the basin … the greater the storage capacity (e.g., a household bathtub vs. a jacuzzi vs. a swimming pool).  A battery capable of discharging (emptying) at a rate of 10 Amps discharged over 20 hours would equate to 200 AMP Hour (AH) battery.  The standard rating is for 20 Hours.

When you need more battery power and/or speed, instead of getting yourself a massive super tanker of batteries, you can construct a battery bank.  A battery bank is the result of joining two or more batteries together for a single application. What does this accomplish? Well, if you have two or more batteries you can connect them to increase your volts, your amps, or both. The first thing you need to know is that there are different ways to successfully connect two or more batteries together.  The first is Series, and the second is Parallel, and the third is Series Parallel.  It is important to discuss this topic because when more than one battery is connected together the resulting battery pack will have either a different voltage or a different amp hour capacity (or both) when compared to a single battery.

Series adds the voltage of the two batteries together, but keeps the same amperage rating (also known as Amp Hours). For example, these two 6 Volt batteries joined in series now produce 12 Volts, but still have a total capacity of 10 Amps.

Never cross the remaining open positive and open negative terminals with each other, as this will short circuit the batteries and cause damage or injury.

It is best to be sure the batteries you’re connecting have the same voltage and capacity rating. Otherwise, you may end up with charging problems, and shortened battery life.

Parallel connections will increase your amperage rating (also known as Amp Hours), but the voltage will stay the same. In the diagram to the left, we’re back to 6 Volts, but the Amps increase to 20. It’s important to note that because the amperage of the batteries increased, you may need a heavier duty cable to avoid the cables burning out.

It is also possible to connect batteries in what is called a Series/Parallel configuration This may sound confusing, but we will explain below. This is the way you can increase your voltage output and current rating. To do this successfully, you need at least 4 batteries.

SERIES & PARALLEL (Increase Your Volts And Your Amps) 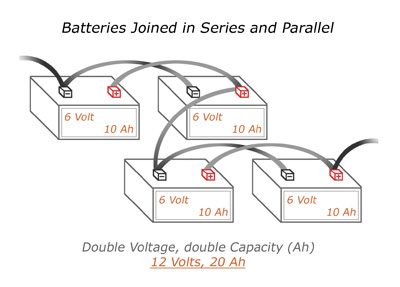 If you have two sets of batteries already connected in parallel, you can join them together to form a series. In the diagram on the left, we have a bank that produces 12 Volts and has 20 Amp Hours.

It’s alright if a terminal has more than one cable connected to it. It is necessary to successfully construct these kinds of battery banks.

In theory, you can connect as many batteries together as you want. But when you start to construct a tangled mess of batteries and cables, it can be very confusing, and confusion can be dangerous. Keep in mind the requirements for your application, and stick to them. Also, use batteries of the same capabilities. Avoid mixing and matching battery sizes wherever possible

Always remember to be safe, and keep track of your connections. If it helps, make a diagram of your battery banks before attempting to construct them.

The two most common causes for battery failure are undercharging and overcharging.

Undercharging is a result of batteries being repeatedly discharged (beyond their 80% maximum capacity) and not fully recharged between cycles.  If a battery is not recharged the sulfate material that attaches to the discharged portions of the plates begins to harden into crystals. Over time, this sulfate cannot be converted back into active plate material and the battery is ruined. This also occurs when a battery remains discharged for an extended period of time. Sulfation is the number one cause of battery failure.

Overcharging batteries results in severe water loss and plate corrosion. The second leading cause of battery failure is overcharging.

The good news is that with a charge controller both of these problems are avoidable.